The penultimate installment in a series is often one of the best, and that will be the case as the Sedona Poetry Slam returns for its penultimate slam of the season on Saturday, April 23.

The performance poets will present energetic and competitive spoken word at the Mary D. Fisher Theater beginning at 7:30 p.m.

A poetry slam is like a series of high-energy three-minute pieces, judged by the audience. Anyone can register to participate in the slam for the grand prize of $75 and the second place prize of $25. To enter the slam, poets will need three original poems, each no longer than three minutes. No props, costumes or musical accompaniment are permitted. The poets are judged in Olympic fashion by five members of the public drawn at the start of the slam. 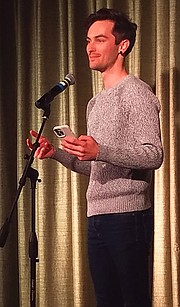 Slam poetry is an art form that allows poets on the written page to share their work alongside stage performers, hip-hop artists, and lyricists. Poets come from as far away as Phoenix, Tucson and Flagstaff, rivaling adult poets from Sedona and Cottonwood, college poets from Northern Arizona University and young poets from Sedona Red Rock High School. All types of poetry are welcome on stage, from street hip-hop and narrative performance poems, to political rants and introspective confessionals. Any poem is a “slam” poem if it is performed as part of a competition. All poets have three minutes per round to entertain and inspire the audience with their creativity.

The last poetic slam of the season will take place on Saturday May 14.

The prize money is funded in part by a donation from Verde Valley Poetry Supporters Jeanne and Jim Freeland.

Email foxthepoet@yahoo.com to register early to compete or by Friday before the slam or at the door on slam day. Poets wishing to compete must purchase a ticket in case the list is filled before their arrival.

What is poetic slam?

Founded at Chicago’s Green Mill Tavern in 1984 by Marc Smith, poetry slam is a competitive art sport designed to excite people who would otherwise never go to a poetry reading, excited about the art form when it becomes a high-energy competition. Poetry Slams are judged by five randomly selected audience members who assign a numerical value to the content and performances of individual poets.

Slam poetry has become an international art sport, with over 100 major poetry slams in the United States, Canada, Australia and Western Europe. Slam poets have opened for the Winter Olympics, performed at the White House and the United Nations General Assembly, and have been featured on HBO’s “Russell Simmons’ Def Poets.”

Dr. Cole Bennett, Professor of Language and Literature and Director of the Writing Center, celebrates the 20th anniversary of the ACU Writing Center. (Photo by Alyssia Anuat) February 11, 2021 by Maci Weathers The Writing Center will once again host a poetry contest for Valentine’s Day, but this contest will span the […]

Kendall Grimes, a junior at Battle Ground Academy, has reached the finals of Poetry Out Loud, a national poetry recitation contest attracting students from across the country. After making it through her school and state competitions and then the 2021 national semifinals, the two-time Tennessee State champion will face eight others for the national title. […]

Another round of our annual LEO Literary Contest is underway, and we’re once again blown away by all the talent floating around in our community. We picked a 1st to 3rd place for each category – short fiction, poetry, color photography, black and white photography and cartoons – and various honorable mentions throughout, but it […]