Jakland’s sidewalks have undergone a makeover, with lines of poetry strewn across the neighborhood reflecting Oakland’s beloved history and heart.

The group launched a call for entries for the competition in the fall of 2021 and released the competition winners to celebrate National Poetry Month on April 25. The poems were spread across Oakland, in high-traffic locations, including in front of Dippy the Next Dinosaur at the Carnegie Museum of Natural History and popular restaurants. The poems began appearing in May and will remain on the sidewalks until there are signs of wear, in which case the Improvement District will decide whether or not to remove them.

The group received over 80 poems, all related to the theme “Celebrating Oakland’s Past, Present or Future”. 25 poems have been selected to be painted on sidewalks across Oakland with a wide range of poets, including students, professors and longtime residents.

Leah Friedman, the group’s marketing and communications manager, said the organization hopes to bring beauty to neglected places in Oakland.

“The poems draw attention to often overlooked, but important areas,” Friedman said. “These surprising and colorful pieces bring art and joy to everyday spaces and enhance the experience of those who use them.” 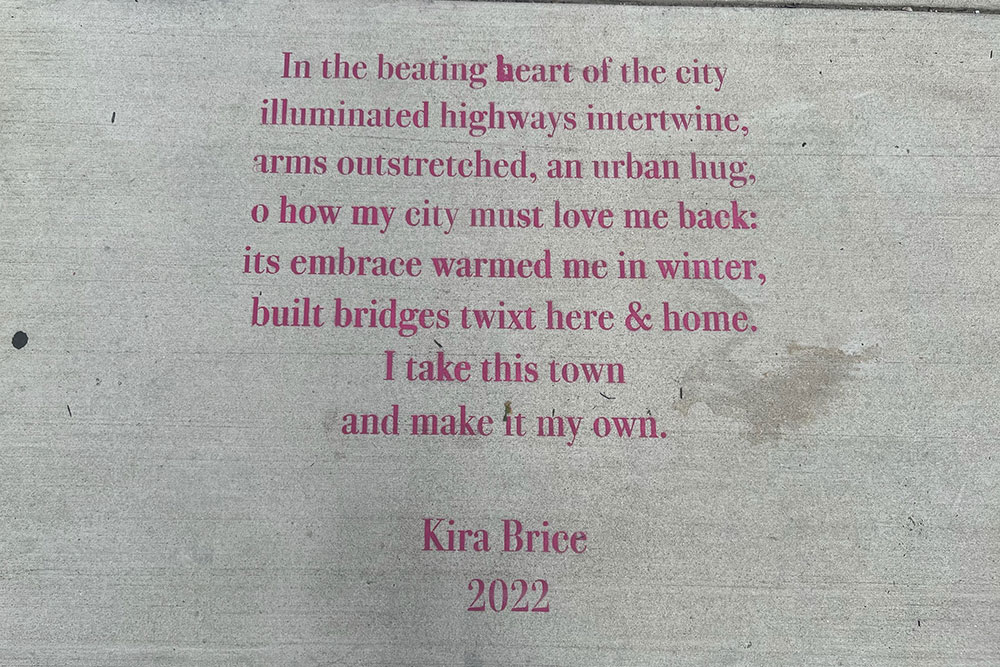 Kira Brice, a 2020 Pitt alumnus, spent four undergraduate years at Oakland and is one of the winning candidates. She had two pieces that were accepted. His favorite of the two poems features the Pittsburgh movement. Brice said her poem is a reflection of history and her formative years as a student in Oakland.

“I had a very formative time in my life there right now, like as an undergrad, you’re stepping into the real world of politics for the first time,” Brice said. “So it was kind of mind blowing with a newfound independence and again, like finding my place and with people coming and going in Oakland, it felt like a very transitional part of town.”

“By creating, sharing or just looking at public art, I think it’s really emboldened people and empowered them to let the world know their own rights and share them with others, whether it’s whether members of the public or any group of people,” Brice said. “Bringing the poetry specifically into the public sphere was really key to seeing how, as these words no longer just live on a page, they now live in the real world.”

Lisa Kay Schweyer, winner of the contest and program manager for Carnegie Mellon University’s Traffic21 Transportation Research Institute, wrote her poem about some of Oakland’s overlooked but important features. Schweyer said she hopes the group will continue with this project as a testament to the “transient nature of Oakland”.

“Eventually the paint will disintegrate, so it’s a transitional way to highlight what people think of the community and it gives people walking something to look at while they watch other than their phones,” said Schweyer said.

For Sarah McMullen, another contest winner who is director of leadership projects at the University of Pittsburgh, the sidewalk initiative is a great way for visitors and longtime Oakland residents to see Oakland from different perspectives. .

“We have so many people going through Oakland, for example, Fifth Avenue, you have foot traffic from students, working residents and visiting patients and so being able to have them interact with people who are here all the time, c It kind of becomes like an Oakland community scavenger hunt,” McMullen said.

McMullen’s poem titled “Oakland Pulse” compares the rhythm of Oakland to a heartbeat. 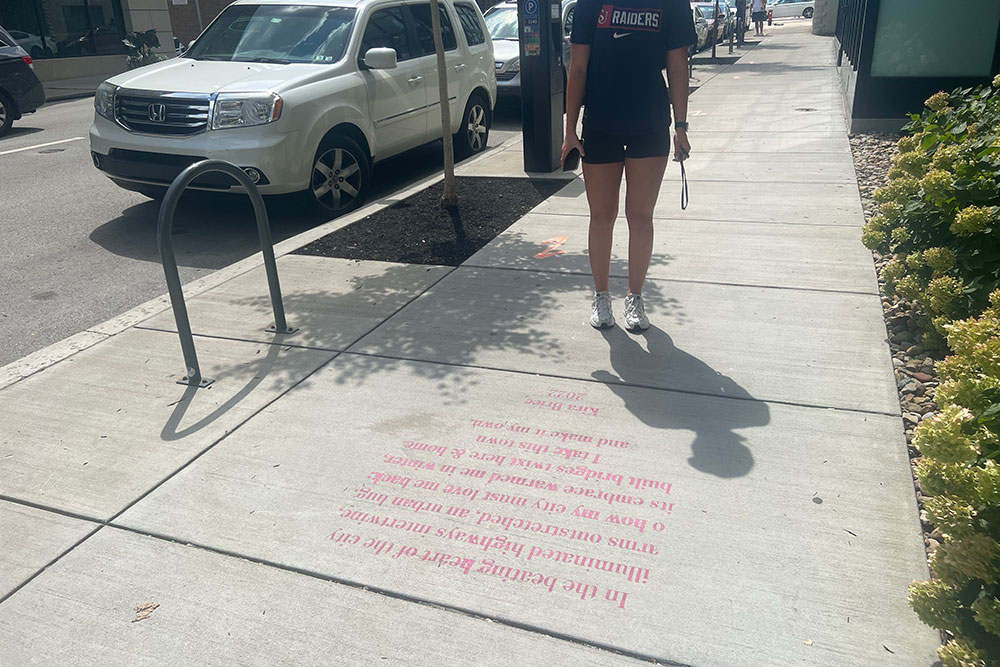 “Oakland always reminded me of a sort of pulse with all your veins and arteries running through your, through your body. So the poem itself is focused on this rhythm and the movement of the feet up, down, up, down, up, down, similar to a heartbeat, which , I think, really reflects how Oakland works and how it looks to people who visit or live here.”

Whether you’re a longtime resident, new to town, or have no understanding of poetry, McMullen said the Sidewalk Poetry initiative has something for everyone.

“I would say what’s included in these poems will be the absolute heart of what makes Oakland special,” McMullen said. “For people who have been here a long time, I think you can say that because when someone who’s been in Oakland for a while and sees one of the poems, it makes them smile because a lot of time they’ll have kind of a memory attached to that and for new residents I think it makes the city less intimidating when there are all these poems about how people here love Oakland.

All winning poems and their locations can be found on the interactive group map.

Many of this month’s winning poems are written at the intersection of darkness and dawn. While the subject matter is often sad, there is a revelation in the discovery. Each month the Cape Cod Times holds a poetry contest open to all Cape Codders and judged by a panel of published poets. The deadline for […]

Chattanooga, Tennessee (Press Release) – EPB invites Hamilton County students to participate in the 16and EPB’s annual Black History Month Poetry Contest to celebrate February as Black History Month. “We’re excited for the opportunity for students to learn about these events, be inspired by them, and ignite their passion for creative expression,” said Kelvin Boyd, […]

Local writers are encouraged to sharpen their pencils and enter the Delta Literary Arts Society’s inaugural poetry contest. Through April 1, DLAS is accepting submissions from literary novices and seasoned professionals, with cash prizes up for grabs. “We are delighted to provide a forum for local writers to share their work,” Diana Calliou, DLAS Treasurer […]